Catalog No.
A1004
Add to Compare
Email
For beta amyloid generation
Skip to the end of the images gallery 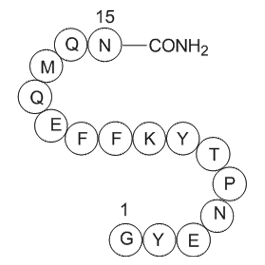 Amyloid precursor c-terminal peptide (APP) (C86H118N20O27S) has the amino acid sequence Gly-Tyr-Glu-Asn-Pro-Thr-Tyr-Lys-Phe-Phe-Glu-Gln-Met-Gln-Asn. Although it has been implicated as a regulator of synapse formation, neural plasticity and iron export, the primary function of APP is not known. APP is best known as the precursor molecule whose proteolysis generates beta amyloid (Aβ), a 37 to 49 amino acid peptide whose amyloid fibrillar form is the primary component of amyloid plaques found in the brains of Alzheimer's disease patients. So it is a possible contributor to Alzheimer′s pathogenesis through MAPKs- and NF-κB-dependent astrocytosis. Recently, APP origin was demonstrated with arthritogenic animals. Also, it induces secondary inflammation, which may cause local damage. 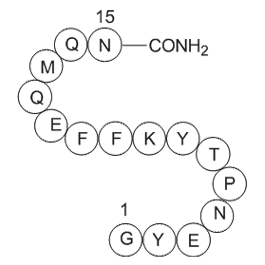