Coronaviruses are named for the crown-like spikes on their surface. There are four main sub-groupings of coronaviruses, known as alpha, beta, gamma, and delta. Novel coronavirus (SARS-CoV-2, previously known as 2019-nCoV) is a beta coronavirus. SARS-CoV-2 is a positive-sense, single-stranded RNA coronavirus that causes COVID-19, the infectious disease that can cause an acute respiratory infection. Studies show that the SARS-CoV-2 S protein retains sufficient affinity to the cellular Angiotensin converting enzyme 2 (ACE2) protein, and likely uses ACE2 protein as a receptor for cellular entry.

There is currently no specific medicine or treatment for diseases caused by SARS-CoV-2. To identify antiviral candidates, scientists are focused on drug repurposing and antiviral molecules screening from chemical libraries. We offer efficient compound libraries to assist in the global efforts to develop novel drug candidates, such as FDA-approved Drug Library and Anti-Virus Compound Library. We also offer reverse transcription and qPCR series to help efficiently detect SARS-CoV-2, and mRNA in vitro synthesis platform to support the development of mRNA vaccines.

APExBIO, as a professional supplier of small molecule inhibitors, provides a variety of inhibitors related to 2019-nCoV, found so far.

We also offer customized screening libraries that allow you to choose the compounds, the sizes, the quantities, the format (powder or solution) and plate map you want in the library.

An overview of the workflow developing mRNA vaccines against 2019-nCoV. Both receptor-binding domain of the spike protein (S-RBD) and Virus like particles (VLPs) were chosen as the antigen. Strategy one: Based on the mRNA in vitro transcription platform, SARS-CoV-2 S, M, E mRNA were synthesized in vitro and individually transfected into 293T cells by using lipofectamine 2000. Virus like particles (VLPs) were produced and used as the presenting antigen. VLPs synthesized by the host cells have the same posttranslational modifications as the native virus, which is an important factor determining the validity of an antigen. Strategy two: For the S-RBD antigen, the RBD domain of the S protein was also expressed in cells using in vitro transcription (IVT) mRNA. (Ref.1) 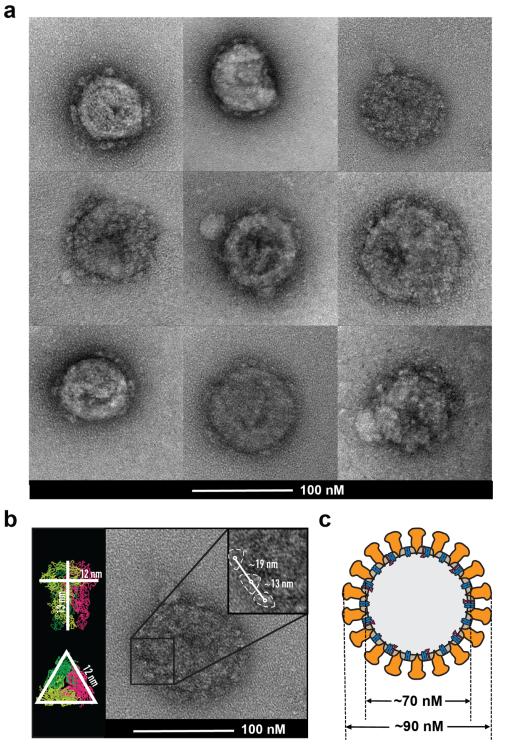 VLPs were visualized under an electron microscope. We observed particles with striking features of coronavirus. The outline of the envelope for most particles was clear, the spikes were visible. The average size of the particle is 70nm in diameter for the membrane envelope and 90nm when including the spikes, consistent with reported native 2019-nCoV virus. (Ref.1)

The trimeric structure of the extra-vesicular domain of the spike protein from SARS-CoV. The receptor-binding domain (RBD) was used as the antigen. Use mRNA to express the receptor-binding domain of the spike protein (S-RBD). The S glycoprotein is responsible for binding to the receptor through its RBD, enabling the virus to enter into target cells by fusing with cell membranes. The western blot analysis was used to confirm the expression of target proteins. (Ref.1)

1.Towards an effective mRNA vaccine against 2019-nCoV: demonstration of virus-like particles expressed from a modified mRNA cocktail.

APExBIO offers affordable custom synthesis of mRNA and long RNA (up to multiple kilobases) with a wide array of modification services at scales ranging from micrograms to milligrams. The mRNA can be generated from DNA templates provided by our customers or we can provide a full service from the ground up. We provide mCAP, ARCA and EZ Cap capping or modified nucleotides implication for all our standard mRNA transcripts.

For ordering and more information, please download this form (Custom mRNA Synthesis Questionnaire.PDF) and send it via email ([email protected]). Our support team will review and provide a quotation soon. 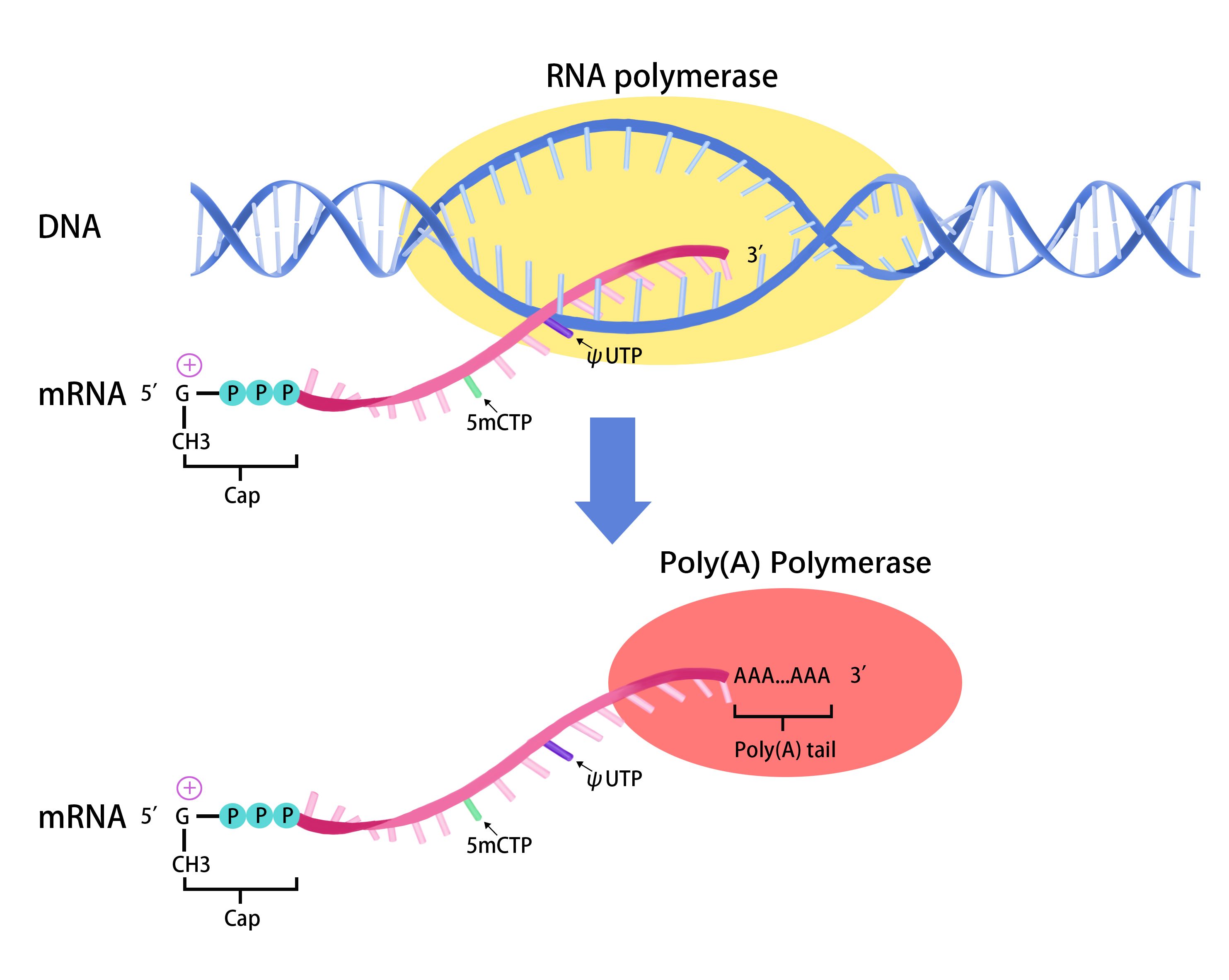 In Vitro Synthesis of mRNA (In vitro transcription, IVT)

A 7-methyl guanosine (m7G) cap structure at the 5′ end and a poly(A) tail at the 3′ end are required for mRNA to be translated efficiently in vitro. Capped mRNAs are synthesized by co-transcriptional incorporation of Anti-Reverse Cap Analog (ARCA) via T7 RNA Polymerase. DNase I is used to remove the template DNA, so Poly(A) Polymerase can attach poly(A) tail to capped mRNA. 5-Methyl-CTP, Pseudo-UTP and other modified nucleotides can also be incorporated into mRNA. Synthetic mRNAs are applicable in cell transfection, microinjection, in vitro translation and RNA vaccines etc.

Our custom synthesis mRNA covers a wide range of applications: 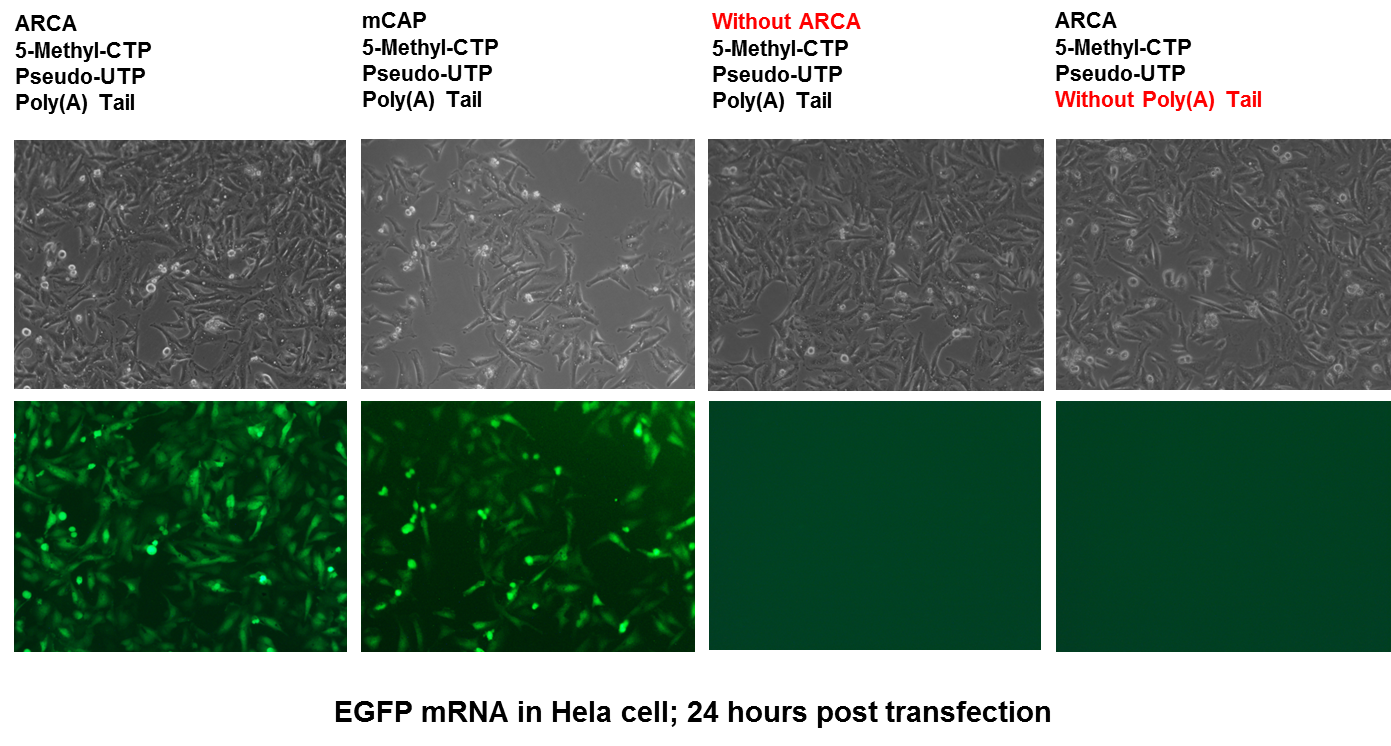 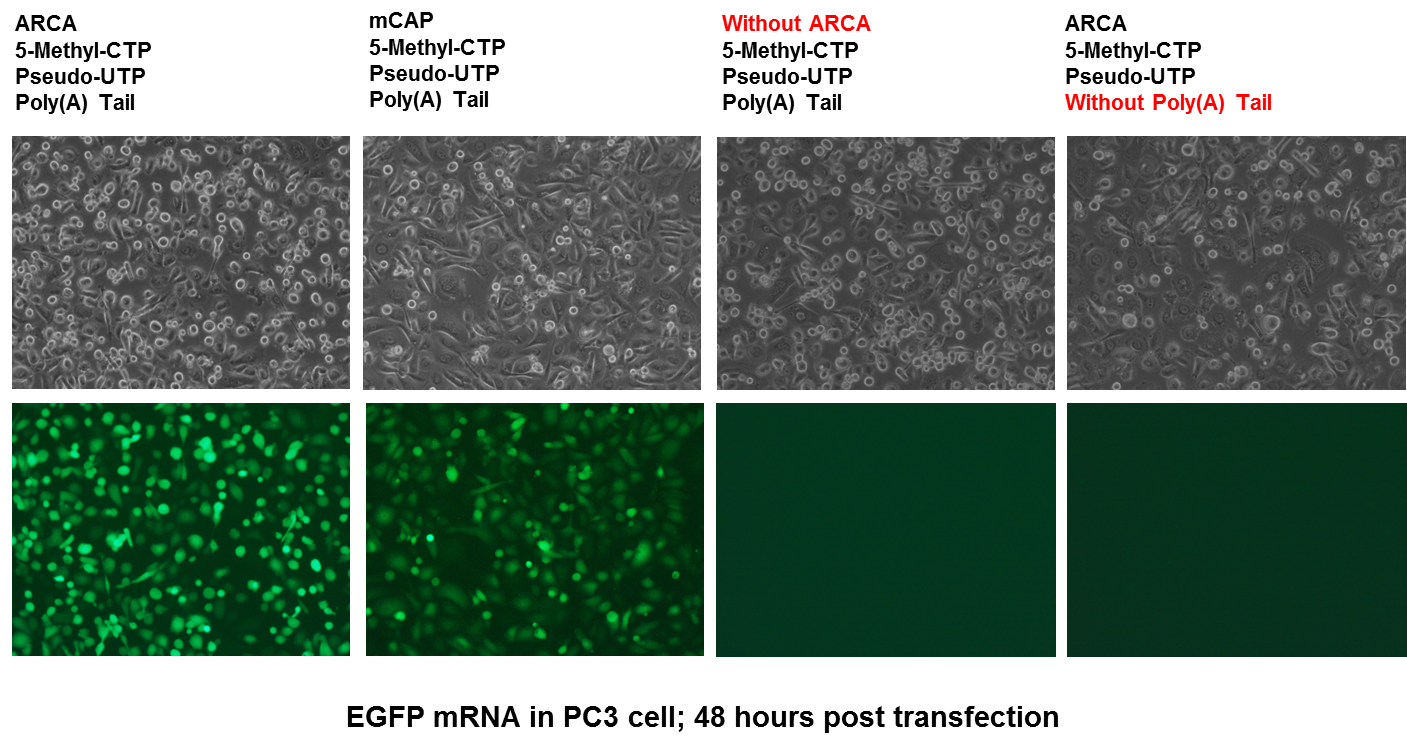 It is a solid phase extraction technique for fast nucleic acid purification. mRNA can be bound to solid phase of silica-gel membranes under certain conditions, with subsequent washing and elution steps in water or TE pH 7. This method eliminates most proteins, DNA and NTPs.

HPLC purification removes dsRNA and other contaminants from in vitro synthesized modified nucleotide-containing mRNAs, yielding mRNA with the high level of translation without generation of immunogenicity or RNA sensor activation.

APExBIO supplies the best quality mRNA and long RNA. This new product lines involve custom synthesis of mRNA and long RNA (up to multiple kilobases) with a wide array of modification services at scales ranging from micrograms to milligrams. The mRNA can be generated from DNA templates provided by our customers or we can provide a full service from the ground up. We offer mCAP or ARCA capping or modified nucleotides implication for all our standard mRNA transcripts.

All of our mRNA products offer: