Catalog No.
A8327
Add to Compare
Email
Photosensitizer used in photodynamic therapy
Skip to the end of the images gallery 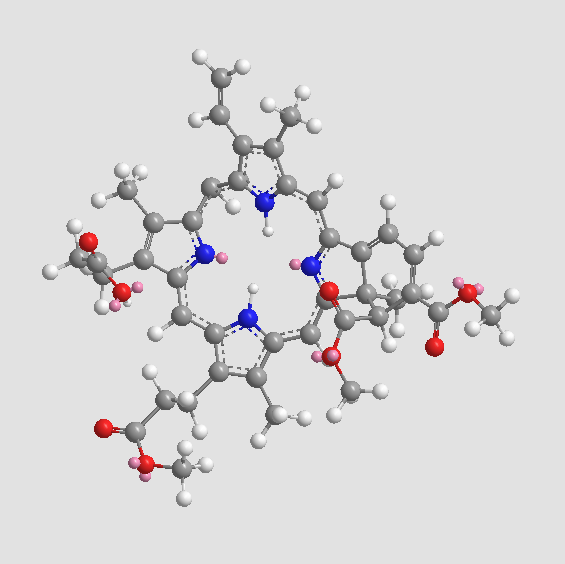 Verteporfin, derived from porphyrin, is a potent photosensitizing agent, which has all the features theoretically necessary for effective photodynamic therapy (PDT) in ocular neovascularization [1].
Experimentas showed that the mechanism of action of verteporfin therapy is intravascular damage leading to the formation of thrombus and selective vascular occlusion. Photodynamic therapy with verteporfin triggers cellular events consistent with a number of the changes described for cells rendered by different chemotherapeutic agents.
More than 90% of HL-60 cells treated with verteporfin at 100 ng/mL showed a hypodiploid level of DNA, when approximately 25% of irradiated cells treated with verteporfin at 50 ng/mL exhibited DNA fragmentation. For cells treated with verteporfin at 25 ng/mL, there was an 85% or greater loss in viability as determined by MTT assays performed 24 hours after irradiation. A 5–6 hours of the plasma half-life of verteporfin was shown in a pharmacokinetic studies in humans. At 6 mg/m2, which is the clinically relevant dose being used in neovascular AMD, no skin photosensitivity was detected at 24 hours, whereas at 18 mg/m2, baseline was reached by 5 days [1, 2].
Verteporfin was also found to inhibit autophagosome formation that does not require exposure to light. Verteporfin could target and modify p62 directly, a protein of scaffold and adaptor that binds both polyubiquitinated proteins destined for degradation and LC3 on autophagosomal membranes. Co-immunoprecipitation experiments demonstrated that crosslinked p62 oligomers retain their ability to bind to LC3 but show defective binding to polyubiquitinated proteins. Interestingly, small amounts of crosslinked p62 oligomers were detected in cells which were untreated, and other groups which were noted the accumulation of p62 forms with reduced SDS-PAGE mobility in cellular and animal models of oxidative stress and aging [3].
References:
[1].Schmidt-Erfurth U, Hasan T. Mechanisms of action of photodynamic therapy with verteporfin for the treatment of age-related macular degeneration. Survey Of Ophthalmology, 2000, 45(3): 195-214.
[2]. Granville DJ, Carthy CM, Jiang H, et al. Nuclear factor-kappa B activation by the photochemotherapeutic agent verteporfin. Blood, 2000, 95(1): 256-262.
[3]. Donohue E, Balgi AD, Komatsu M, et al. Induction of covalently crosslinked p62 oligomers with reduced binding to polyubiquitinated proteins by the autophagy inhibitor verteporfin. PLoS ONE, 2014, 9(12): e114964. 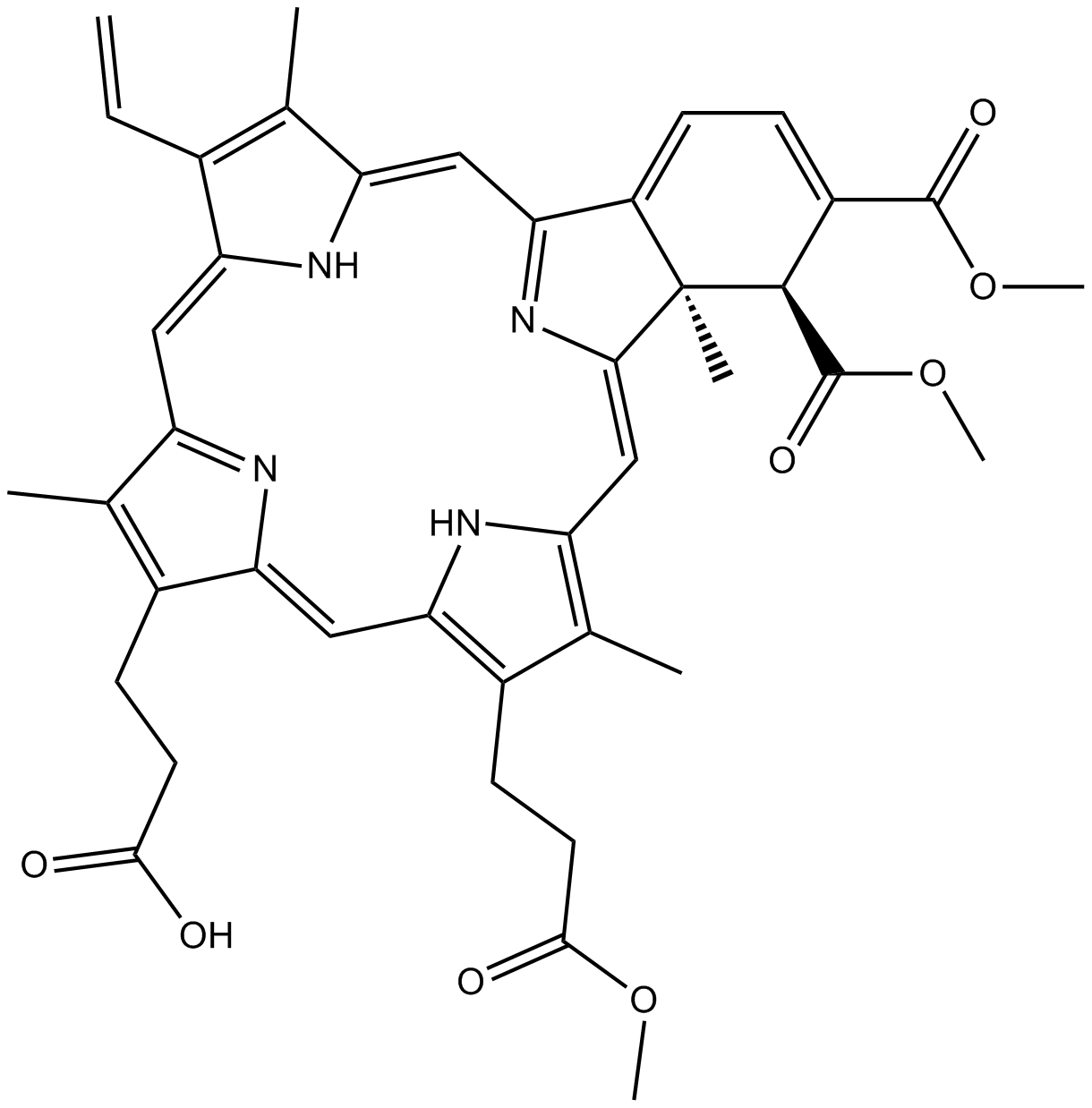 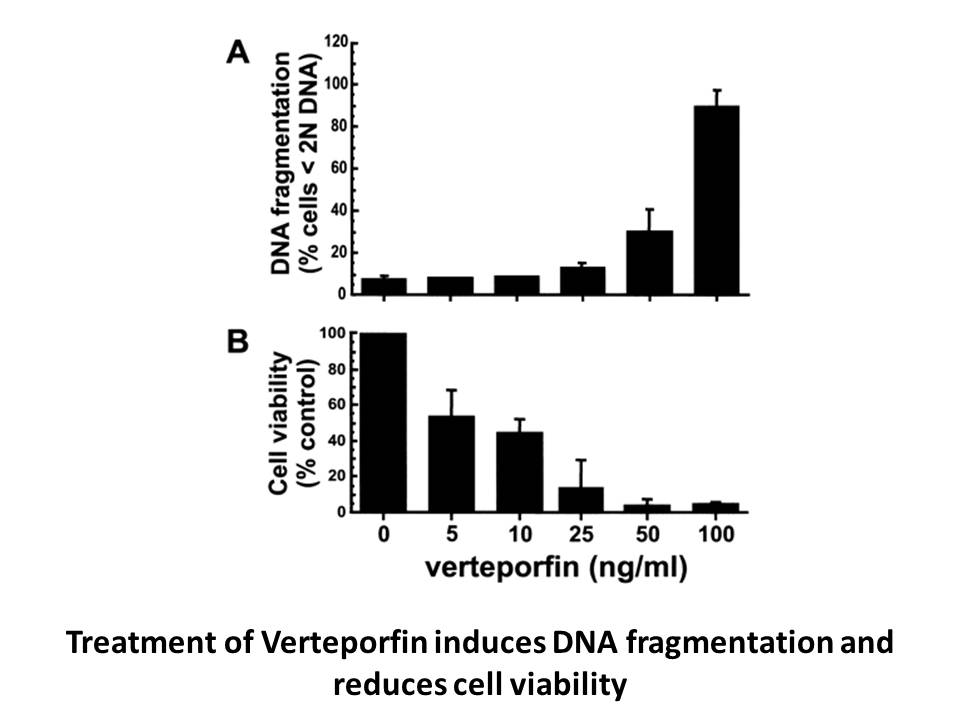 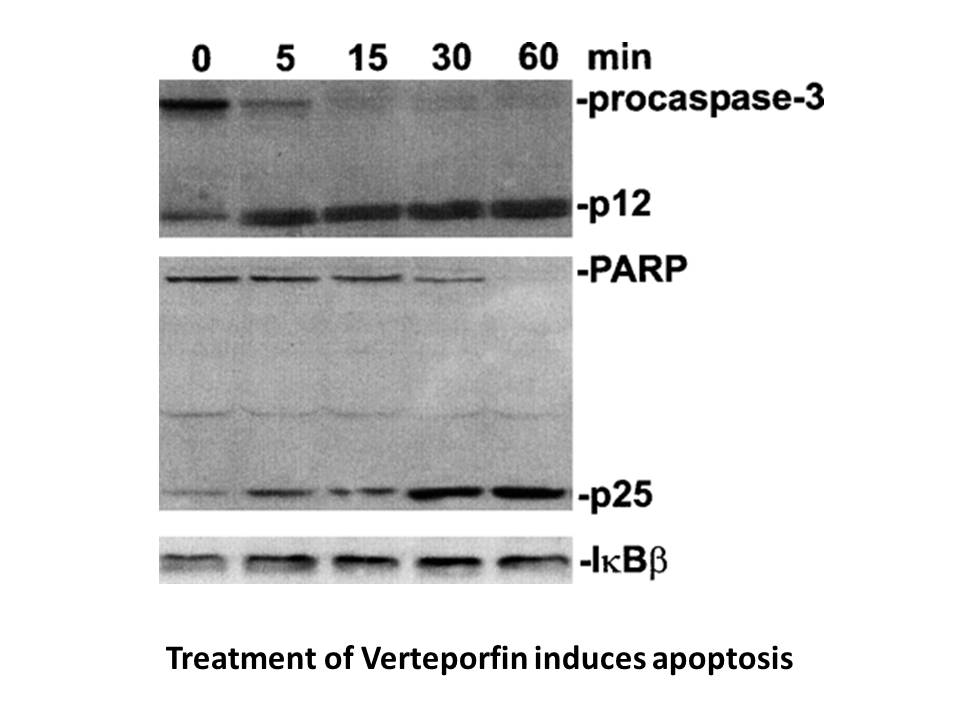 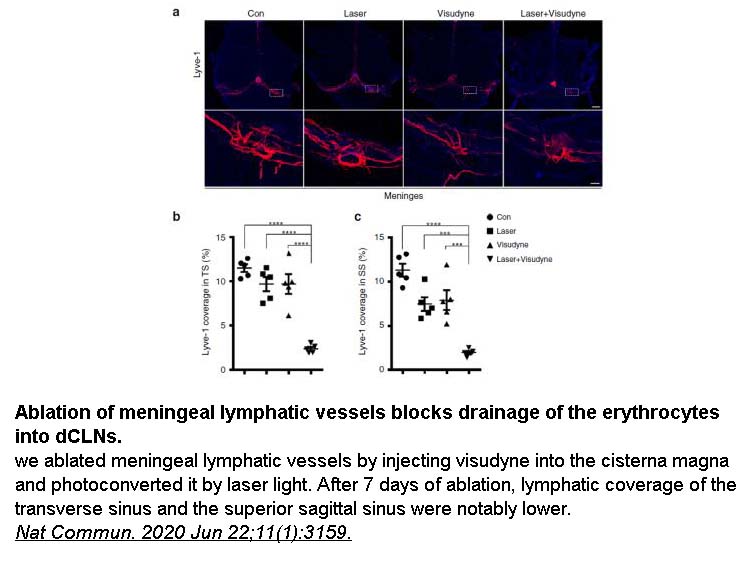