Catalog No.
A1134
Add to Compare
Email
Agouti-related peptide(25-82)
Skip to the end of the images gallery 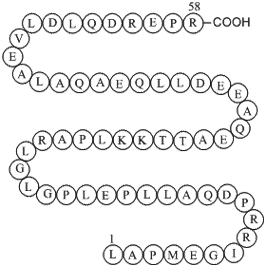 Agouti-related protein also called Agouti-related peptide (AgRP) is a neuropeptide produced in the brain by the AgRP/NPY neuron. It is only synthesised in NPY containing cell bodies located in the ventromedial part of the arcuate nucleus in the hypothalamus(1). Agouti-related protein is primarily expressed in the adrenal gland, subthalamic nucleus and hypothalamus; with lower levels of expression in the testis, kidneys and lungs. The appetite stimulating effects of AgRP are inhibited by the hormone leptin and activated by the hormone ghrelin. Adipocytes secrete leptin in response to food intake. This hormone acts in the arcuate nucleus and inhibits the AgRP/NPY neuron from releasing orexigenic peptides(2). Ghrelin has receptors on NPY/AgRP neurons that stimulate the secretion of NPY and AgRP to increase appetite. AgRP is stored in intracellular secretory granules and is secreted via a regulated pathway.The transcriptional and secretory action of AgRP is regulated by inflammatory signals. Levels of AgRP are increased during periods of fasting. It has been found that AgRP stimulates the hypothalamic-pituitary-adrenocortical axis to release ACTH, cortisol and prolactin. It also enhances the ACTH response to IL-1-beta, suggesting it may play a role in the modulation of neuroendocrine response to inflammation(3) 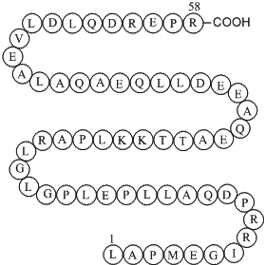